The ultimate in long lens gimbal heads, especially for 600mm telephoto users. The Wimberley MKII needs no introduction…if you shoot with any of the super telephotos, is this really the ultimate support to get? Lets get on with the review and find out how the king of the gimbals performs. Update 2017: Is the Wimberly MKII still the best gimbal on the market? Despite having been around for many years, and with various other manufacturers competing with copies, the MKII is still the latest version that Wimberley offer. If nothing else, this is a testament to its design and build.

Upon opening the very plain box, you’re greeted with the MKII in two pieces. The first thing that strikes you as you ‘assemble’ the unit is what a work of art, as far as build quality and engineering go, the Wimberley is. Everything is finished to an exceptionally high standard and the whole mount feels as solid as a single piece, when it’s all tightened up. Coming in at 1.4kg (the Nikon Dx series of body are roughly 1.3kg) the Wimberley MKII is quite compact, given the weight it is designed to support. Ranging from 300 f2.8 lenses right up to 800 f5.6, once locked down everything is solid. Compared to the old but still surprisingly popular Manfrotto 393, the single arm cradle is a far easier unit to carry around thanks to its shape. Once you have everything setup, you can just sling the whole rig over your shoulder and walk about in the field quite easily. This can be achieved with even less fear if you use a modern Gitzo tripod, with locking base plate.

The MKII is about as simple as you could hope to operate once you have set it up, more on that in a minute. There is a rubber, easy grip friction knob at the top to tighten and loosen the tilt and the same below for the pan. Both knobs are designed to require very little force to operate and the whole setup can be tightened very quickly and easily with just a simple light twist – something that is handy if you need to move quick or want to add a teleconvertor or swap bodies…just one quick tighten of the tilt knob and it will support the lens weight happily even once you remove the camera body, which makes the lens very front heavy. The rubber feel to the knobs also makes them easy to grip when you have gloves on too. The cradle has a built in Arca-Swiss style plate mount, so no adapters are required meaning quick swapping between other lenses and cameras that you may already have plates for. 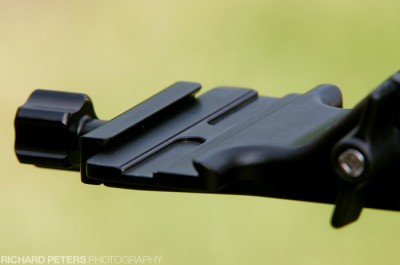 The MKII is designed to comfortably support even the heaviest of lenses. It feels as sturdy with a flagship body and high end telephoto as it does with lesser loads. It never feels strained and the joints operate as smoothly as when they are not under load. Lock it down and there is not even the smallest bit of movement or lens droop. Used in conjunction with a solid tripod such as the Gitzo 5 series, you’ll find no movement through the viewfinder, even in breezes, making it ideal for use with mirror lock up and a remote shutter or cable release (of course it’s not wind proof so will eventually give some viewfinder movement as wind strength gets stronger). Even better is the fact the head is modular, and supplied in the box is a 25 page booklet that lists all manner of add-ons you can use…from macro clamps to flash brackets, there are plenty of options making this head practical for more than just long lens support. It’s also thankfully robust! Whilst trying to negotiate slippery seaweed covered rocks on the Isle of Mull, I had my Gitzo 5 series, with the Wimblerey attached, in one had and my old 600mm in my other. I slipped and something had to be dropped to free a hand to steady myself. Well, the tripod went and all I heard was the Wimblerley smacking off the wet rocks. It chipped some paint here and there but otherwise it came out working just fine. 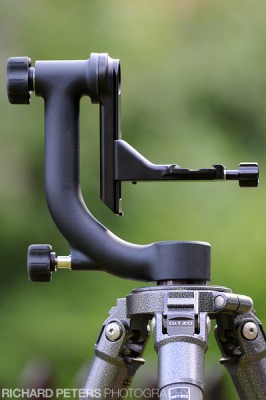 There is a small downside to the operation of the Wimberley though…well it’s not really a downside but it is worth mentioning if you plan on using it with more than one lens on a regular basis – and this brings me back to the setup of the head that I mentioned earlier. The Wimberley, unlike other units such as the 393, is designed to work mainly on counter balance (the 393 works mainly on friction with help from counter balance) so that when all the friction knobs are loosened fully the lens will still stay in place wherever you let go of it. To effectively get the counter balance setup you need to adjust the height of the base plate the lens sits on, up and down to find the pivot point of the lens you’re using. If you don’t do this the lens will not be counter balanced properly and will droop when you let go. So, if you plan on using more than one lens with the MKII, it might be worth marking the height position of the base plate for each lens to make it quicker in future – Wimberley really should have etched markings on the head to make this easier for users. Cradle adjusted for the 600mm

The good news is this adjustment is quite easy to make. You simply unlock the base plates own lock, as pictured and adjust the base plate up and down. The Wimberley is a first class bit of kit and deserves it’s ‘king of the gimbals’ crown, make no mistake. Of course, all this fine craftsmanship and practicality comes at a price…and that can be the down fall of the unit for some. Lets be honest, there ARE cheaper alternatives out there (I used the MANFROTTO 393, one of the cheapest, quite happily for several years) which will give you decent levels of support – but as they say, ignorance is bliss. The Wimberley is far more practical in real world use and is so quick and simple to lock and unlock, that I think if you get the chance to use the MK II out in the field you’ll want one…plain and simple! Attach it to a solid tripod such as the GITZO GT5541LS and you will have one of the most stable and flexible tripod setups you can get!

Thinking of buying?
If you live in the UK the Wimberley can be quite hard to get hold of with only a couple of people supplying them including Warehouse Express and Bob Rigby.

And if you live in America the MKII can be purchased from B&H Photo.